How corporates and startups are setting the tone for the future and applying AI technology in an exemplary manner.

Artificial intelligence, the big driver of digitalization, inescapably affects every economy, society, and nation. The perception that countries like the US or China will rule this technology, with Germany being left behind in the process, is widespread and persistent. The challenge is real. But pessimism or abandoning the subject altogether would not only be counterproductive at this point but also wrong. What we are actually seeing is the emergence of a German AI ecosystem shaped by artificial intelligence thought leaders. Existing German startups are bringing real-world solutions to problems through the outstanding use of technology. Corporates are confronted with AI transformation in a unique way.

The German Thought Leaders campaign wants to send a strong signal to the public, showing that German role models for applying AI already exist. Highlighting the best, most brilliant players in the field, we intend to build momentum in terms of confidence and progress. This campaign will give insight into “how AI application works,” delivering first-hand knowledge of noteworthy AI practitioners in Germany. Let’s learn from German thought leaders.

What is a thought leader? In our view, a thought leader is a company that applies artificial intelligence in an exemplary manner. A doer, taking action that has an impact and using the technology to benefit products, processes, and people. German enterprises competing on a world scale and advancing our country and Europe in the rapidly evolving field of artificial intelligence.

This series is a collection of what appliedAI sees as a national or multinational thought-leader in AI. The series gets updated over time.

Part 4: How does Linde implement AI into its business?

If you follow the current discussion about AI in Germany, you know that this discussion takes place at a very abstract level. So, how do German companies actually master AI transformation? In which areas are they already active?

Based on our insights into AI transformations at various companies, we as a neutral initiative approached one particularly interesting company to jointly depict how AI application can be realized. Let’s have a closer look at Linde.

As a long-standing German company in the traditional gas industry, Linde is less at risk of being disrupted than others. Nevertheless, Linde has chosen to leverage AI to gain a competitive advantage. Linde has started considering key factors for the AI transformation of its business. At the same time, there are already AI projects and relevant use cases underway at Linde.

The following infographic demonstrates how Linde implements AI into its business and which key factors are essential for efficient AI application. Additionally, a use case demonstrates a successful AI application at Linde. Check it out; 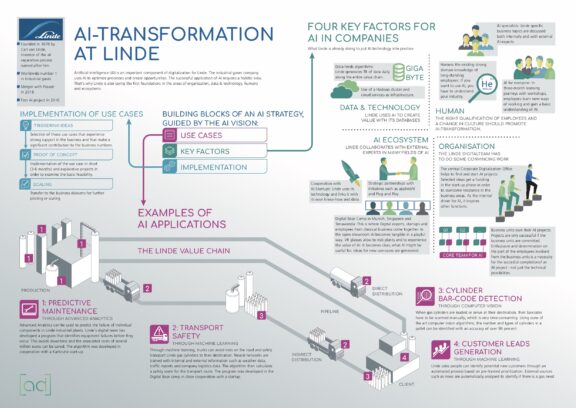 i2x is the leading german AI startup in the field of customer service improvement. Call center agents and sales staff create massive amounts of data in terms of conversations with their customers. This data treasure remains largely unused nowadays, however, there is massive information about the drivers of customer satisfaction during sales calls and the efficacy of conversation strategies in this data. To leverage the potential hidden in this data i2x has created an AI-driven system that augments and supports the calls of sales agents in real-time by leveraging these data assets. i2x has created an interactive assistant for sales agents that monitors conversation flows in real time and helps to improve their performance by providing real-time advice on how to optimize their interactions.

i2x’s proprietary speech recognition technology is trained on company-specific data to transcribe calls with the highest accuracy. Machine learning mechanisms use this data to provide targeted insights to identify company-specific best practices. This enables sales agents to improve their own performance based on their calls and experiences of their team as a whole. It helps organzations to learn from their previous customer interactions and to test new communication strategies.

We met i2x CTO llya Edrenkin in Berlin and talked with him about i2x’s strongest competitor Google, that recently introduced a new AI-based speech bot called Google Duplex as well as about the implications for the business model of i2x. Ilya also made us aware of an interesting aspect about the AI ecosystem in Germany and Berlin in particular. Check out the video to learn more about i2x and how they support agents to perform better in conversations.

Artisense Corporation is a German thought leader in the field of artificial intelligence. Founded in Palo Alto, the startup’s founder came to Germany to build up its research & development entity. Prof. Dr. Daniel Cremers, Leibniz award winner and professor at TU Munich is CSO of the company. Artisense offers a camera-based real-time mapping engine to enable autonomous systems to localize without LIDAR, reducing cost drastically. With the proprietary software, vehicles and robots are able to „see as humans“, converting camera images and sensor data into environmental maps. Cloud-based deep learning and computer vision algorithms make sense of the data and enable the vision of autonomous driving: letting a vehicle move autonomously in a safe and cost-efficient way.

We visited Artisense in their office in Garching near Munich. Alexander Waldmann, Operative Director at appliedAI, met Till Kästner, COO at Artisense and talked about their product and the difficulties in the German automotive industry.

„Size in our sector and industry is not necessarily always an advantage. Many of the large industry players have failed to keep up the pace towards full autonomy in automotive and robotics as well as in their products and strategies. We believe one of our advantages is that we are a very agile and targeted company that has been able to hire top research and engineering talent.“ Till explained.

micropsi industries is a German thought leader in the field of artificial intelligence. The robotics software company, which is located in Berlin, uses machine learning to control robots in dynamic industrial settings and is thus working towards enabling intelligent industrial automation in our numerous SMEs and advancing the German economy as a whole. micropsi’s solution allows existing systems to be easily upgraded.

Today, robots in production are relatively dumb, clumsy, and generally need to be programmed in advance to carry out any particular task. They struggle to manage in situations characterized by a lot of variances, such as the insertion of cables or the processing of soft material. micropsi provides an AI system composed of software, a controller, and a camera, making robotics applications in these scenarios possible.

The technological component, the software, is called Mira. It is an artificial intelligence system that is trained by human demonstration and teaches the robot in real-time to imitate tactile and visual behavior in a large spectrum of unpredictable industrial use cases. ​Deep neural networks learn to discern the configurations of images and sensor data that result from highly specific contexts and translate them into commands for the movement of the robot. In this way, micropsi is pushing the boundaries of what is possible at the intersection between humans and machines. The product benefits workers and, at the same time, improves value creation in manufacturing.

We visited the micropsi team in their office in Berlin. Alexander Waldmann, Operative Director at appliedAI met Ronnie Vuine, founder of micropsi industries. Ronnie who has an academic background in computer science and philosophy from his studies at Humboldt University, leads a growing team of over 15 people. Machines that interact autonomously with the world around us have always been a passion for the serial entrepreneur, who has a thing for science fiction.

In contrast, his business view on AI is rather sober. “It’s not a magic black box, it’s just math,” he stated. “You simply need to be on top of it.” Thus, a critical component for him is having the right people on board at his startup, micropsi, who are capable of understanding and dissecting research papers. Of which, interestingly, most of the content is often too specific and therefore not applicable to real world industrial settings – a key learning he shared with us at appliedAI.

Having a strong theoretical understanding is important – but not enough. This is why the founder is bridging the gap to the industry in the product development process and getting a feel for the challenges in the practical environment in which his product will be used. “We can come up with a lot of interesting things on a whiteboard in a nice office in Berlin. But what I do a lot is walking through factories looking at how people are doing things and asking ‘could we automate this, could we be more efficient here, could we raise the quality?’ It’s a matter of being out there and having the conversation with the people who have the problems,” Ronnie explained.

Read the feature on micropsi industries, with the title “This Robotics Startup Chose Germany Over Silicon Valley, and Here is What They are Working On”, on forbes.com.

The authors of this series